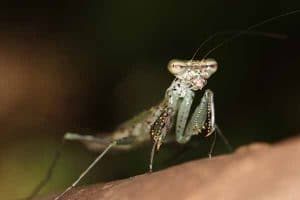 During a first census of the praying mantids (Mantodea) on Panay, five new species, whose location was limited to the remaining forests only, have been discovered. The mantids already known to occur on Panay so far were briefly introduced in our 18th annual report. The description of the new taxa is currently being prepared by our Project Manager, who is a specialist in this field.

In his newest paper, the unrivalled expert on Philippine moths, Johannes H. Lourens, has revised the grouping of 17 Cyana species of the tiger moth subfamily. In this process, he described six new species, including one from Palawan named after the founder of PhilinCon: Cyana curioi. The other new species come from Palawan, Luzon, Mindanao, Leyte and Samar, and from Panay and Negros.

For the moth aficionado: the tiger moth subfamily (Arctiinae) occurs in the Philippines with the mind-boggling number of about 350 species, part of which are distributed widely across Sundaland, though 10 of the said Lithosiine assemblage are endemic to the Philippines. The distribution of the 17 Cyana species permits to draw tentative conclusions about their grouping into five lineages that historically, while speciating, have branched out from Luzon southward, from the Visayas north- and southward, and from Mindanao northward.

A new species of tailless whip scorpion or whip spider

A female whip spider carrying nine eggs, found by PhilinCon staff on the forest floor near Malumpati, NW Panay Peninsula, Municipality of Pandan, turned out to be a new species, identified and described by Brazilian researchers (see reference below).

The new species is the second of the genus Sarax (familiy Charinidae) found in the Philippines, alongside with S. brachydactylus, a species with a wider distribution across the Philippines (on Palawan, Luzon and Cebu), in Malaysia and Cambodia. A third species of the Philippine whip spider is the large Charon grayi, which has been known to occur for a long time in numerous places, including Panay. These cryptic nocturnal species possess a pair of special thin legs (“whips”) which serve as antennas, and strong, inward-bent pedipalps (see Wikipedia), resembling the forelegs of a praying mantis and adapted to catching live prey.

A spectacular new species of lowland whip scorpions (Telyphonoides panayensis, Arachnida, Uropygi, Telyphonidae) from Panay Island, the largest member of this group in the Philippines so far, is one of the latest of species discoveries by PhilinCon. As detailed by Krehenwinkel, Curio, Tacud & Haupt (2009, Arthropoda Selecta 18: 139-143), the new whip scorpion represents even a new genus that is set aside by morphological characters from the four species of Telyphonus in the country. There is only one other, small-sized species of whip scorpion (Glyptogluteus augustus) of a different lineage known from Panay. However, up until now, knowledge of whip scorpions, a very ancient, circumtropical group of arachnids, in the Philippines is still incomplete.

From the upland of the Northwest Panay Peninsula Javier & Coleman (2010) had described a new species of terrestrial landhopper (Talitrus curioi). This is the first species of the highly diverse assemblage of amphipods within the subphylum Crustacea or “shellfish” found on Panay. Amphipods are commonly known as scuds, side swimmers or, depending on their habitat, as sandhoppers, beachhoppers or landhoppers. While amphipods (see Wikipedia)  usually are an important component of marine or freshwater ecosystems , the described species of Panay is terrestrial. It has managed to colonize damp soil litter in primary and secondary upland forests.

The sexual dimorphism of this species differs from all known members of the genus Talitrus. The recent reevaluation of the morphology of the species by Lowry & Coleman led to the conclusion that it is so different from the rest of the family that a new genus, Curiotalitrus, had to be erected. The whole family Talitridae of the beach- and landhoppers now consists of 60 genera in total, with the new species being accordingly renamed Curiotalitrus curioi.

Further collecting in the upland of other Philippine islands will show whether there exist still other genera, or at the very least, relatives of the new species. If new forms were different species or even genera, one would have to conclude that the beach-hoppers have colonized the uplands several times independently. The new landhopper shows some resemblance to Talitrus species from South African forests. The phylogeny of this group of crustacean forest-dwellers that originated from marine species still needs to be elucidated.

The description of two new shrew species is adding to the Philippine mammal fauna two new endemics that belong to two separate lineages of different origin. The Panay Shrew (Crocidura panayensis) from the upland forest of the NW Panay Peninsula is one of two firmly established mammalian endemics of Panay Island, the other being the Panay Cloud Rat (Crateromys heaneyi). Yet, additional small mammal species may show hereafter. Because of the extant Negros Shrew (C. negrosensis), which is known for long, the finding of a new shrew on Panay that has evolved in parallel since the separation of these two Visayan islands would not be that surprising.

The second new species, the tiny Batak Shrew (Crocidura batakorum), is one of two endemic shrews of Palawan.

New island race of the

A beautiful black and yellow colored snake subspecies endemic to Panay. Discovered by the able Filipino scouts of our project.

A rare nocturnal gecko endemic to Panay, found in primary lowland rainforest. So far, almost nothing is known on its biology. L. corfieldi is a medium sized stout forest-dweller found in tree holes and under bark. It is the only gecko of the genus Luperosaurus on Panay and an endemic of this island, as known so far, while another species, L. cumingii, possibly comprising several new species, had long been known to occur on other Philippine islands. Other Luperosaurus species are known from other parts of the Oriental Faunal Region.

Gekko ernstkelleri, a cave-dweller, is the third species of the genus Gekko on Panay and the only endemic of the genus there. The new species is known so far only from cave entrances and rocky outcrops in northwest Panay.

The Panay Limestone Frog has been found – with logistic help of our project – by the Municipality of Pandan, NW Panay, at Mt. Lihidan in PhilinCon’s area of operation and described by Siler et al. (2007). This find adds to the growing number of Platymantis frogs known from Panay and underscores the Philippines (with 35 species) to be the diversity center of the genus. The new species is the fifth Platymantis species of Panay.

A new species of wolf snake, Lycodon fausti sp. nov., has been described on Panay Island. It is the first endemic Lycodon known to occur in the Western Visayas, whereas the alien species L. aulicus has been introduced there and has been known for a long time. Various other Lycodon species endemic to the Philippines are known from other islands than the Western Visayas. The genus Lycodon comprises many other species in the Oriental Faunal Region which extends down to the SW Pacific. The new species is named in honor of Dr. R. Faust, the late president of the Frankfurt Zoological Society, the longtime sponsor of our project.

First evidence of the King Cobra, Ophiophagus hannah, occurring on Panay: in 2002 .

The Steere’s (or Philippine) honey buzzard (Pernis steerei), a Philippine endemic, was first recorded on Panay in 2004. This raptor was first seen flying in April 2004 in the NW Panay Peninsula near its highest elevation, Mt. Banderahan. The undulating flight upward with a wing-quiver ‘sky dance’ at its peak with fully extended wings, and an unbroken downward swoop forming a bigger undulation, differs characteristically from the similar but simpler display flight of European Honey-buzzard P. apivorus. Circumstances indicate that the display flight serves some nuptial or territorial functions. The observation by Gewers et al. (2006, Forktail 22: 163-165) is at the same time the first distributional record of the species on Panay Island. This observation was sadly corroborated by a bird shot dead in Barangay Cubay in 2006 (E. Curio, T. Kuenzel, unpublished).

A Philippine Sail-fin Lizard (Hydrosaurus pustulatus) with a forked tail, originating from a broken tail with a regrowing larger end (regeneration) was observed on Panay Island, thus confirming that agamid lizards can also regenerate their tail upon injury (color pictures in Gaulke & Demegillo, Sauria, 2006: 4, also published in our 13th annual project report, 2007).

The large Chinese Bullfrog (Hoplobatrachus rugulosus), probably an invasive (= alien) species in the Philippines, was found for the first time in NW Panay after it had been found previously in Luzon by other researchers (Gaulke & Operiano, Sauria 2006: 51, also published in our 13th annual project report, 2007).

A Banded Philippine Burrowing Snake (Oxyrhabdion leporinum visayanum) was first found in Panay at a river in the NW of island, after it had been known already from nearby Cebu and Negros Islands, a not too surprising discovery (Gaulke & Operiano, Sauria, 2006: 52, also published in our 13th annual project report, 2007).

More than 164 years ago C. L. Koch had first described the whip scorpion Minbosius manilanus (Arachnida, Uropygi) from Manila and Luzon. This Philippine endemic was believed to have been found on Panay Island for the first time in stomachs of older Marine Toads (Rhinella marina), a South American relocated species (Haupt 2007, Senckenbergiana biologica 87: 135-136). Meanwhile, further examination showed that the specimens were in fact immatures of a new species, the so-called Giant Whip Scorpion Telyphonoides panayensis gen. et sp. nov. (see details). As a group, the whip scorpions are found in the tropics around the world, though on Panay Island they have escaped notice of all of our project’s researchers and staff for more than 12 years. In spite of intense nightly searches at the collecting sites of the mentioned Marine Toads (Malumpati area of the NW Panay Peninsula), the species has proved so elusive that the first five individuals found had fallen prey to the toads, whilst not a single one had been a collector’s hit until H. Krehenwinkel found the type specimens.

The Colasisi of Panay Island (Loriculus philippensis regulus), a local race of one of the two Philippine endemic Hanging Parrot species, has been found breeding for the first time in the upland of the NW Panay Peninsula near the Sibaliw Research Station. The nest hole in a dead tree stump and eggs placed on green leaves, was possibly used three times in succession within one year by the same pair of birds. This is the second breeding record of the Colasisi, a previous one was from the island of Bohol (L. p. worcesteri). (Hembra, S.S., E. Curio & J. Jamangal 2008: Papageien 21: 173-174. German).