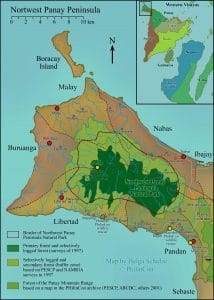 The Philippines was originally completely covered with rainforest. Now only 2% of the country’s land area is still covered with primary rainforest. The Philippines is home to more than 1,000 known amphibians, birds, mammals and reptiles, of which almost 50% of the animals can only live there. Almost 15% of the species are endangered and many endemic species have not yet been discovered. Additionally, 40% of the almost 9,000 plant species of the Philippines exist only on the islands. Source mongabay.

What are the threats?      The forest is increasingly being claimed by the inhabitants due to the growing population and the lack of alternative sources of income. Slash-and-burn agriculture, deforestation and poaching of wild animals are shaking a once stable ecosystem. In 2002, the forest was declared a Protected Area (PA) by the Philippines officials. Nevertheless, protective and educational solutions are absolutely necessary to show the local population legal and sustainable alternatives. The organization’s end is the protection of the shrinking rainforest area which is representing one of the earth’s most important biodiversity hotspots (Source globalforestwatch) .

What does lowland primary rainforest mean?

The lowland rainforest is the usual known rainforest everybody thinks of. It is characterized by not being a cloud forest, thus it occurs up to 1,000 m height in a tropical climate zone. Primary rainforest means, the forest is untouched and unchanged by humans. So the primary low elevation rainforest is the colloquial jungle.

Whats so special about NPPNP?

Unlike many regions of the Philippines, the northwest Panay peninsula still harbors significant stands of lowland primary rainforest. It is the last contiguous lowland forest in the Western Visayas. The tropical evergreen rainforest hosts an impressive biodiversity including several endemic species which are only occurring in this region. The remaining stands of rainforests on Panay are valuable as gene banks for the rehabilitation of deforested areas in the entire Western Visayas region.

Unfortunately, more than 50% of the rainforest in Southeast Asia has already disappeared.

However, tree cutting and lash-and-burn farming continue locally unchecked and the cumulative effect of such activities is a point of concern to many communities and conservationists. Significant areas of the peninsula and the Central Panay Mountain Range (CPMR) have already been largely denuded and are in need of reforestation.

Why is that happening?

The value of ecosystems for humans, local, and global economy is often underestimated as compared to the value of timber, meat and other products gained by its short-term exploitation and destruction.

Protection of the forest and reforestation

PhilinCon’s work for the preservation of the rainforest starts with the work of forest rangers taking action against illegal logging and poaching, supported by conservation awareness measures. We also provide specific protection for native animal species which are important for the regeneration of a healthy natural forest, specific protection is provided.

| Why is rainforest important for water supply? |

The northwest Panay Peninsula has still relatively intact forested watersheds which are very important for the protection of the people from natural disasters, for water supply and agriculture. The poster below illustrates the problems caused both by the destruction of forests and poisoning through mining. The poster is based on an idea and draft by Guntram Meier (InGRIP animal/pest control for conservation); © PhilinCon.

The figure may be used for free for other projects, given that PhilinCon is proberly quoted. 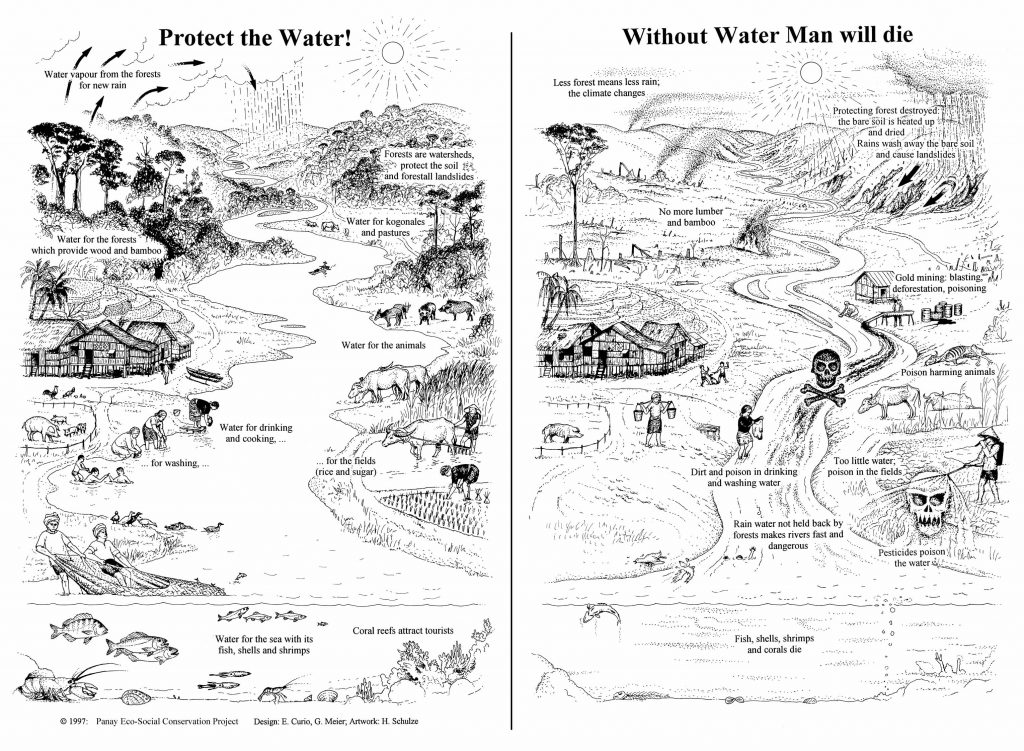 See the animals who live here: the hornbills and our other threatend treasures and the big visayan 5