| President of PhilinCon and Operator of Rescue Center | 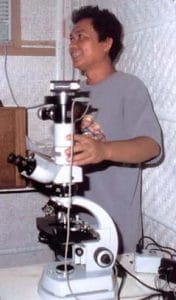 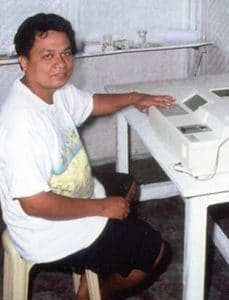 Dr. Enrique “Bimbot” Sanchez, animal lover, rescuer of native wildlife of Panay and keen observer, has been President of the new NGO Philincon (Philippine Initiative for Environmental Conservation, Inc.) since 2011. After the new election of board members in 2017 he is now PhilinCon’s vice president. PhilinCon strives at a balance between nature and people dependent on a healthy environment. With its current stronghold in the rehabilitation and release of endangered wildlife species PhilinCon depends crucially on enthusiastic helpers like Bimbot who had already served as Veterinary Consultant of the PESCP that had fallen into ashes due to irresponsible dealings of people at the top. By a strike of good luck the founder of the PESCP, Prof. Curio, had run into Bimbot and his expertise early on (1995) and had needed no persuasion to make him join the staff of the Reha and Release segment of the project that still stands its ground in spite of the adversities that had afflicted PESCP shortly before disaster struck in 2010.  It is therefore no chance coincidence that Bimbot, together with concerned previous staff and further environment-minded countrymen, established PhilinCon in 2010.

Upon joining the upper ranks of the project, Bimbot had soon become a dedicated wildlife veterinarian supporting the rehabilitation and subsequent release back into the wild of endangered and not so endangered reptile (Mabitang = Panay Monitor Lizard), bird and mammal species admitted to the project’s three rescue facilities. One of these is situated in Mag-aba (Municipality of Pandan), on Bimbot’s and his family’s farm, where the project was generously allowed to soon erect maintenance and flight exercise cages to the benefit of sick and/or injured wildlife, or those that had been confiscated from or donated by private households. The maintenance of all this wildlife in the said facilities is taken care of by four caretakers supervised by Bimbot. To enable him to do first class work Bimbot had been sent abroad earlier to colleagues in Cologne Zoo (Germany) to become abreast with the most up to date tools of vet medicine, had received time and again equipment for research and diagnosis through the hands of Prof. Curio and soon struck a successful balance between earning his ‘bread and butter’ as a vet (today working for the Department of Agriculture) in a rural setting in and around Pandan and yet also rendering his indispensable services to the PESCP and now its successor PhilinCon.

For Bimbot, maintaining wild animals in good health and preparing them for release back into the wild is not just a job as is the daily routine of their jobs for most people, no, he indulges work with animals. And this lies at the root of his being a keen observer with sharp powers of observation. To give just one example of this rare gift: When releasing a Changeable Hawk-Eagle from narrow living quarters into the large flight cage for exercising sustained power flight he noticed the following to happen. Right upon release into the large training cage the eagle, after having flown a few rounds, landed on a branch with an unpleasantly audible noise and was gasping for air. A few days later Bimbot noticed that the eagle had acquired already so much exercise that his landing on a perch could no longer be heard and his breathing had become indistinguishable from an eagle in the wild, there was no longer any gasping. How many vets would have noticed these – sometimes – subtle differences between a debilitated, unfit animal and one in best shape, ready to be released into the wild with all its hardships? You can bet that even seasoned animal caretakers would overlook such behaviour subtleties that are nevertheless crucial for a successful release. Only dedicated lovers of animals with a keen sense for their well-being look closely enough to make ex situ conservation become a success story.